Shake It and Break It 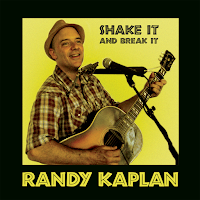 
Multiple award-winning Randy Kaplan has borrowed songs from classic blues men of yore and reworked their lyrics to be appropriate for children. These men include John Hurt, Charlie Patton, John Lee Hooker, Tampa Red, Blind Blake, Robert Johnson, Skip James, Dave Van Ronk, and Mance Lipscomb. The musical styles feature country blues, ragtime, and Delta blues. The result is that Kaplan presents 12 story songs in which he both sings and speaks. “Candy Man Blues” warns those who eat candy all the time that they will end up with bad teeth and bad health. “Shake It and Break It” is the story of an indestructible jelly roll. In “Boogie Chillen,” Kaplan looks for places to boogie, such as schools and libraries. In “It Hurts Me Too (Sitting on Top of the World)” parents empathize with their injured children at the playground. “Doing a Stretch” is not about spending time in prison but is about one man’s stretching routine in the morning (complete with rubber band SFX). In “Chicken Chump Blues” a child who doesn’t want to jump into murky, slimy lake at camp is called a “chicken chump.” A stray dog that is rescued by a child and becomes a family dog, sings “Been Your Dog.”  Kaplan also sings a verse in Canine, with barks and growls. The “Roll and Tumble Blues” is a silly story/song about a pet monkey who loves to eat muffins, but since there is also a pet cat in the home whose name is “Muffin,” he freaks out whenever the monkey asks to “eat muffins.” Baby “Crow Jane” (whose crying can be heard in the background) has insomnia and will not nap despite her daddy’s best efforts. “From Four Until Late” tells about a boy who, while his parents are away, stays with his Granny, who does things much differently than his parents. “Swinging on a Star” includes spoken comments from a mule, pig, fish, and monkey. After singing the chorus of “Little Brown Jug,” Kaplan begins rambling about how one should be concise and germane, and other silly ramblings about juice, aliases, tangents, etc. This outstanding album not only will have children laughing but also introduce them to blues music.
Website: https://randykaplan.hearnow.com/
Posted by Beverly at 9:52 PM